Are you suffering from frequent sinus headaches, pain in the forehead or between the eyes? Do you keep getting sinus infections? Are you looking to avoid surgery on your sinuses? Have you tried various treatments and not had any relief? Osteopathic Manipulative Treatment (OMT), the all-natural alternative, may be the answer for you.

OMT may be beneficial in the treatment of sinusitis

Nasal sinuses are hollow, air containing cavities in the skull behind the forehead and cheeks of the face. There are four pairs of sinuses and these are referred to as the paranasal sinuses. Sinusitis occurs when one or more sinuses become infected causing inflammation of the membranes that line the sinus cavity. 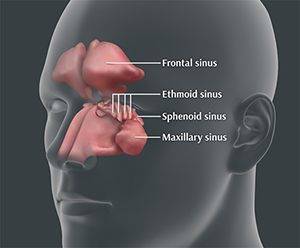 Drainage of sinus cavities is not only accomplished by gravity, but it also requires normal bone motion, functional ciliary motion, and free flow of mucus. Ethmoid and maxillary sinuses are present at birth; frontal and sphenoid sinuses do not appear until age 8 to 10 years. Compression of the head during delivery or from postnatal trauma can encroach on the size of the sinus cavities and interfere with normal drainage.

Chronic sinusitis often occurs in people with asthma, the majority of who have allergies. Another group of people who may develop chronic sinusitis are those with significant anatomic (structure) variations inside the nose, such as a deviated septum, that leads to blockage of mucus.

One of the most common symptoms of sinusitis is sinus pain, and the location depends on which sinus is affected.

In addition to the pain, people with sinusitis frequently have thick nasal secretions that are yellow, green or blood-tinged. Sometimes these secretions, referred to as post-nasal drip, drain in the back of the throat. Acute and chronic sinusitis is strongly associated with nasal symptoms such as a stuffy nose, as well as with a general feeling of fullness over the entire face.

Less common symptoms of sinusitis can include tiredness, decreased sense of smell, cough that may be more severe at night, sore throat, bad breath and fever.

Sinusitis is diagnosed taking a thorough history and physical examination. Imaging may be ordered if your doctor deems it necessary. Other tests your doctor may use include:

Click here to read a patient testimonial from someone who was having chronic sinus problems and was treated with OMT.